I grew up eating lots of eggplant, thanks to my parents’ prolific organic home “Garden of Eatin’!” A dear friend of mine, a sweet Greek lady by the name of Vicki, introduced me to eggplant tomato stew years ago and I loved it from the start! She passed away at a very young age late November 2019, just days shy of her December birthday. I cannot find the recipe Vicki gave me, but I was able to modify this recipe from memory, and the help of similar recipes I found online. I hope you enjoy it!
NOTE: The stew tastes much better the following day, if you can refrigerate it overnight. Otherwise, allow a few hours before serving warm, and garnished with fresh chopped parsley. I serve this with toasted or pan-friend polenta cakes. 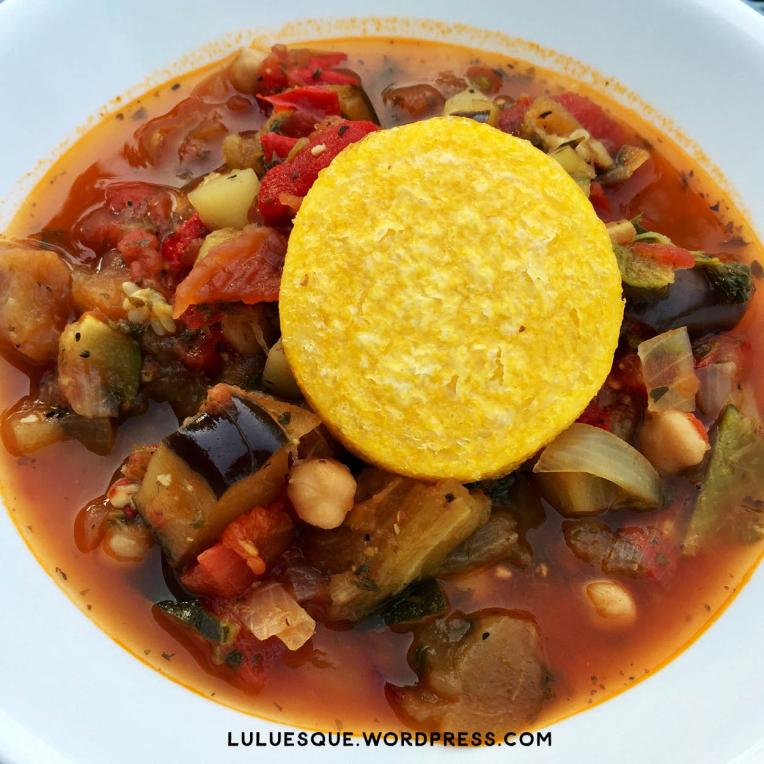 Oh baby, it’s cold outside! Where I live, the mercury has begun its winter drop. Just in time for some fleece-lined pants, fuzzy socks, a cozy fire, and delicious homemade soup! Give this Martha Stewart recipe a try! It’s healthy, easy, cozy, hearty, and packed with some exquisite exotic flavors that will liven up the blustery season. This soup is so delicious, I will be making it again during winter!

Have a warm, wonderful, and safe Thanksgiving holiday! 🙂

NOTE:
The ingredients and instructions below are verbatim from Martha’s site, with my modifications/annotations in magenta. To make this soup vegan/vegetarian, replace with vegetable broth.

Betcha didn’t know that you actually like lima beans, huh? Lima beans (Phaseolus Lunatus) and butter beans are actually the same beans, but at different stages: limas are green and immature, while butter beans are, white, mature, and dried. These kidney-shaped legumes got their name from Lima, Peru, their place of origin. They are a great source of fat-free protein and their high fiber content help stabilize sugar levels—perfect for individuals with diabetes or hypoglycemia!

I normally use canned organic cannellini beans, but for this particular post, I wasn’t able to find them at the grocery store. You can essentially use any of the three popular “white beans” (i.e., navy, Great Northern, or cannellini), that pleases your palate. Read about the differences HERE.

Wow, it has been many moons since my last post and “Lulu Original” recipe! I’ve been a tad bit busy, to say the least. I think you’ll like this recipe. I was inspired to make a cozy soup that was relatively quick and easy to make now that we have lost 1 hour of sunlight and the mercury has dipped well below 32°F.

Many of the ingredients may already be in your refrigerator and/or freezer, so just pop by your local grocer and pick up that rotisserie chicken.  As always, I encourage you to use organic ingredients if possible. Some vegetables just aren’t available organic, but it’s ok!

*NOTE: I used 3 small potatoes and 2 chicken legs because I prefer my soup to be more “soupy” than with chunks of stuff.

Folks, I think winter has finally passed and spring is well on the way. This may be the final bit of cooler evening temperatures until Autumn!

Back in January 2013 I tested a delicious recipe from one of Clean Eating magazine’s back issues. I wasn’t able to post the full recipe at the time, but here it is now: modified, improved, and then some! This time in lieu of mushrooms, I’m adding hearty hominy, along with sweet corn kernels. My darn sweet neighbor introduced me to hominy, and now I’m obsessed with them! The best way to describe hominy is that they are like “chewy nubs.” Enjoy! 🙂

I might as well have called this the “everything but the kitchen sink soup,” given the lengthy name! 🙂

When I think of chowder, it’s usually a bowl of creamy soup with vegetables, potatoes, and clams. It’s not a brothy soup with tomatoes. However, when I started looking for recipes to try because I have hominy and corn in the pantry, most corn-hominy chowder recipes called for lots of tomatoes, sans cream or dairy of any sort. I thought, “Well…OK. I’ll give it a whirl, but it just sounds like I’m making corn-tomato soup with some hominy in it.” While it tasted great, it just didn’t have that cozy, “chowder-y” feel I was craving. SO, after having already cooked this pot of chowder, I took out a new pot and sautéed some diced celery in butter, added milk, and several heaping spoonfuls of organic flour I had in the freezer, then into the already cooked soup they went ─ voila! Instant chowder! 🙂

So, what is chowder? The word chowder is a corruption of the French word “chaudière,” meaning cauldron, the pot in which stews and soups used to be cooked. There are different styles of chowder. In North American cuisine, most chowder recipes contain some sort of fish and/or shellfish, like clams and oysters. New England-style chowder is rich and creamy, often containing salt pork, clams, onions, and potatoes. Manhattan-style chowder omits the cream-based broth in lieu of tomatoes. Of course, as with all recipes and cuisine, the dish will vary from region to region. If you go to the south, you’ll find corn instead of clams in your chowder. If you are in Florida, you’ll see conch in your chowder.

I guess I ended up making a New England-Manhattan-Southern chowder! 😉

I like this recipe because it forced me to use ingredients I never thought could, should, or would go into chowder: cinnamon, cumin, and garam masala.

INGREDIENTS: Use veggie broth if you want a vegetarian meal.

This recipe is a combination of two similar recipes that I found from my cookbooks: Vegetarian and 400 Soups, both of which were treasure finds in the bargain section of Barnes & Noble ages ago. It is bound to kill any virus residing in your little body. 😉

It’s packed with potent anti-inflammatory compounds called gingerol. One of the main ingredients is the ginger root which boosts the immune system, aides digestion, curbs nausea and vomiting, acts as an anti-inflammatory, and protects against cancer cells. What more could you ask for from this pungent, versatile root? 🙂

Enjoy! If the soup is too spicy for your taste buds, let it simmer an extra 10 minutes and/or add some milk/cream to it.

A friend gave me her back-issues of “Clean Eating,” a wonderful magazine devoted to eating and living a healthy, whole lifestyle. In the January/February edition, there was a soup that caught my eyes, mostly because I’ve never thought of adding kale to soup. I’m used to roasting my kale or eating it raw in salads. I’m not sure I’m allowed to type this recipe and share it. I tried looking for the recipe online but it seems you have to purchase each back-issue for $5.99. SO, in order to respect copyright laws, I’m just going to tell you what I put in my soup, and you’ll just have to pull out your arsenal of culinary skillZ, which I know you have hidden under those fancy sleeves of yours. 🙂

As usual, I added my own touch (corn kernels!).

‘Tis the season…for inFLUenza, that is! “Feed a cold. Starve a fever.” Whatever the old saying is, it’s never good to starve oneself (think of how bad that would be on your metabolism or your appearance!), no matter how terrible you are feeling.

This vegetarian soup is super easy to make, tastes delicious, and the garlic and spinach should help you get back to your healthy-oxen self again in a jiffy! It may also help you rid of those pesky Vampire problems I hear you’ve been having in your town!